Towards the end of 2017 we published a newsletter summarising proposed changes to FCA capital requirements. The final rules have just been approved by the European Parliament and we now have a timeline and clarity on the changes.

Towards the end of 2017 we published a newsletter summarising proposed changes to FCA capital requirements. The final rules have just been approved by the European Parliament and we now have a timeline and clarity on the changes.

There have been some modifications to the original propsoals and the FCA retains a level of discretion in certain areas on how particular rules will be implemented.

The EBA approved the English text in April 2019 with other languages to follow.  The FCA is releasing a consultation paper towards the end of 2019 indicating how it proposed to implement these rules into the handbooks.

The new rules are set to apply from January 2021.

The system at the moment is rather convoluted with various permissions leading to a myriad of different requirements.  These changes aim to consolidate the situation and simplify it.  The new rules however could mean major changes to the amount of eligible capital your firm needs to hold and how this is reported to the FCA.

Brexit is not set to have an impact on the implementation of the new regime, as the UK will need to comply with EU wide rules to maintain smooth trading with our European counterparts.  The current proposal is that the UK will adopt these rules, and reporting is likely to continue to the EBA in the same way as it does for some firms now.

The rules will apply to all MiFID firms, which is the majority of FCA regulated firms.

The FCA may take this opportunity to tidy up the rule for other firms as well (those covered by the IPRU/INV sourcebook).

We'll start with the most simple change.  The base capital requirements are increasing, and this has not changed since the original proposals.  As before, the largest scope firms are at the top, including dealing on own account and placing trades on a firm commitment basis.  If you don't hold client money and aren't included in the top you are in the bottom category, and all other firms are in the middle.

Currently you can be an Exempt CAD, BIPRU, IFPRU firm amongst others and the new rules categorise all firms according to a new 'class' regime.

The three 'Classes' of firms are as follows:

So the first thing to do is work out what class you are in, and unless you are a bank or a large financial institution, you are unlikely to be class 1, so that means you will be class 2 or 3. 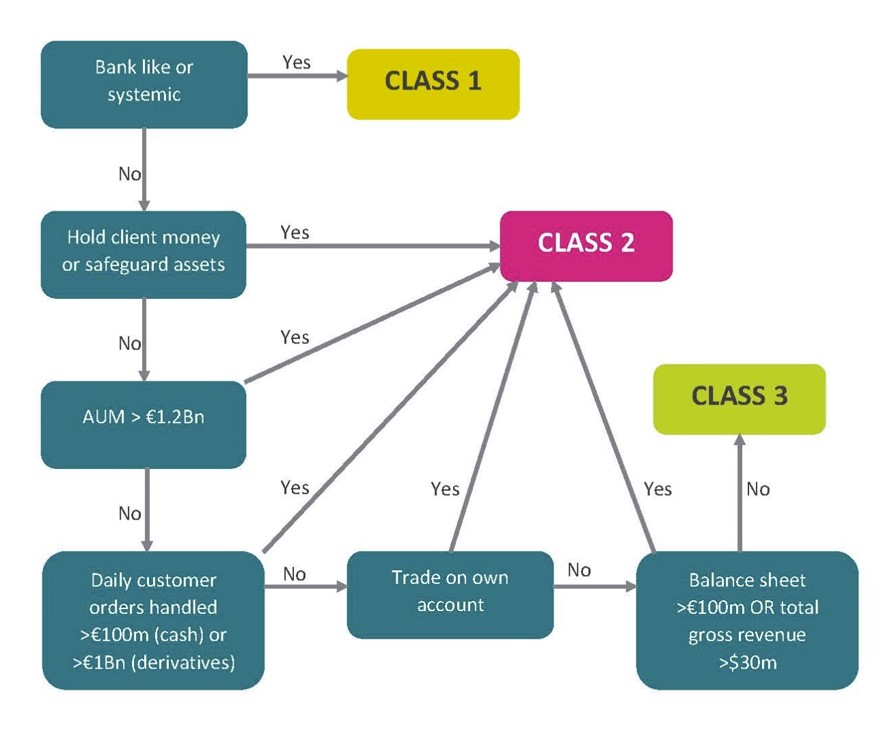 Once you have worked out what class your firms falls into, you can then look at the requirements.  We won't be looking at Class 1 in this document.

The capital requirement for your firm depends on both your authorisation and what class you fall into.

The only change to the initial proposals for the K-factor formula is the client money multiplier.

As you will see, some of the calculations depend on off-balance sheet items, such as client money and AUM, so there is potentially a significant change for some firms.

The K-factor formula is split into three areas, Risk to Customers, Risk to Market and Risk to Firm.  Where these areas are applicable to your firm you include them in the calculation.

* The FCA might ask you to use the 'alternative apporach' to this, but this will be under direct instructions from the FCA, rather than the firm's discretion.

** This includes investment advice of an ongoing nature, so captures more than previously.  We are awaiting further clarify on the definitions.

If you are a Class 2 firm you will probably have been reporting under the CRR rules anyway (COREP).  The rules on FOR calculations are tighter under the CRR than they are under GENPRU and under the new regime, SNCs will be subject to these tighter rules as well.

The principal of the FOR calculation is to take your previous year admin expenses and deduct variable items.  Under CRR, the itmes you can deduct is more restricted, so this will potentially increase the requirement.

For firms currently reporting under the CRR, transitional relief is available for 5 years which will limit the requirement to a maximum of 2x the current requirement.

For firms not currently reporting under CRR, the transitional relief will cap the requirement at twice the FOR (for new firms) or twice the initial capital requirement (if the FOR did not apply).

Under the original proposals, all firms were going to have to prepare an ICAAP, but that has now been restricted to exclude SNCs.

Currently ICAAPs have to be completed on a group basis, but going forward, firms which have to do them will also have to prepare solo ICAAPs.

The format of ICAAPs will change to reflect the K-factor groups (Risk to customer, risk to market and risk to firm).

The FCA can ask to see your ICAAP at any time, and if they aren't happy that you've got your risks covered they can instigate 'Internal Capital Guidance' (ICG) which is an additional amount of capital they ask you to hold on top of your normal requirement, and it lasts until they next carry out a review on your firm.

It is likely that the FCA will undertake a review of firms at least every three years under the new regime, which means either a remote inspection or a site visit.

There will be group capital tests for non SNCs which mean capital adequacy tests will apply at both a parent and solo level.  This currently affects some firms reporting under CRR anyway, but may capture additional firms under the new regime.

This will apply to all firms but some SNCs may be eligible for an exemption.

The liquidity requirement is that the firm mnust have liquid assets in excess of 1/3 of the FOR (ie., on month).  There will be definitions of what constitutes a liquid asset, but cash will be one of them.

It is likely that non-SNCs will have to report on their liquidity requirement.

Reporting under the new regime will be quarterly and as yet the format is unknown.  It is highly likely however that it will be in xbrl format (as it currently is under CRR) which will require the use of specialist software.

Pillar 3 Reporting (this is the public report on the firm's risks and mitigation techniques) will apply to all firms apart from SNCs.  There are also new areas to report on including investment policy and sustainability.

What to do next

Work out what class of firm you are, and apply the new rules to your business to map how the changes are likely to affect you.

If you have not prepared in ICAAP before, make steps to understand what is involved.

Shipleys can assist with the calculations, the returns under the new regime and the preparation and review of ICAAP documents so please get in touch if you need help.  We also have the specialist software and expertise to produce the new returns.

Specific advice should be obtained before taking action, or refraining from taking action, in relation to the above.  If you would like advice or further information, please speak to your usual Shipleys contact.